There were definitely moments when not a bone in my body or an aching, screaming muscle disagreed with Srin when he said "From now on, I pick the vacations.".  I mean, after all, one could describe me as "going big" when I go.  Let me expound.

I had never done more than "day hikes" prior to our  TWO WEEK trek last year to the base of the world's tallest mountain.  Never camped for more than one night in the wilderness. Never been higher than the Rockies. Okay-let me do a take back.  I did climb Mt Fuji but to be fair, I planned it well after I signed us up for Everest Base Camp and just got lucky that NASA sent me to Japan for work mere weeks before my nuptials.

I had snorkeled (sort of, if you count being forced into the ocean with a mask on, holding on to a guide's leg for dear life) once prior to fronting $300 for scuba diving lessons (which I didn't complete, for once again, dear life), of course to prepare for the diving I signed us up to do along the Great Barrier Reef off of Australia.  I couldn't (and barely can now) swim then. I was (am) horribly terrified of the water when it all up and covers my head.

Some may call it overzealous or just plain nutty.  But I see it as seizing the moment.  Not waiting for someone else to show me the world (as I did for years in my life...painfully regretful years).  And dare I say, living life like you were dying.  I consider it one of the few traits that makes me fun, the fleeting spontaneity floating around a type-A-child-grown-into-a responsible-but-way-more-chilled-than-most-type-A-women. Yes, I like things clean and just the perfect amount short of perfect.  But, when it comes to living life, I find myself capitalizing on moments I am sure will yield the best memories.

And that's exactly how we landed ourselves on yet another grueling hike, this time in the Andes Mountains of South America.  When Srin and I were living our nomadic, homeless lives, he saw an ad for tickets to Peru for a measly $600.  At times, I think he regretted mentioning it to me because I was straight determined to go from that minute forward.  We were about to drop a load of Benajamins on a house in D.C., yet the money was irrelevant to me.  That's the beautiful consequence of having parents who worked their tails off in life to ensure that their children could travel the world and pay the bills and buy the organic food without the strain they felt merely feeding five kids (not to mention the grandparents and other extended family that lived with us over the years) on a salary that would make anyone shudder.  Plus, I know a good deal when I see one, and my friends, that was a deal!  Of course, we wondered if we should be taking more days off of work, having just returned from a three month excursion.  "It's next year and by then, we'll have more vacation!" were the words uttered and eventually believed.  And if there is one thing my hubbie has figured out about me, it's probably that when I have my eyes set on something I deem "cool, worldly, and memorable", it will happen. So being the good man he is, he jumped all over it!  Dove in with me and 5 months after we booked our tickets, we were on our way to find the lost Incan city of Machu Picchu.

We were untrained, unfit, and largely unprepared for it.  But, I have to tell you-it was an incredible trip nonetheless.  I did things I thought were seriously impossible.  Things my brain conjured as 'likely not going to happen'.  A look up at steep inclines and a hot, Peruvian sun. With an extra 18 pounds on my back. But they did happen.  And moments afterwards, those good feeling endorphins annoying, healthy people talk about?  Well, they started flowing. We felt good and strong and ... changed. 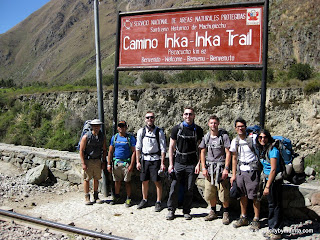 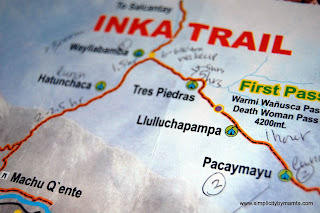 We arrived in Lima just for the night until we transited to Cusco, the old center of the Incan empire.  Cucso sits at 10,000+ feet so adjusting to the altitude had us incredibly tired.  I had a slight headache in the frontal lobe and never have I felt so lethargic.  We both walked all over Cusco, determined to "see the city" and avoid acknowledging our weaknesses.  But, as it turned out, the altitude effects were normal and all part of adjusting. I was thrilled to not be short of breath or have a racing heart.  Maybe, just maybe, my boot camp class put me in better shape than I thought!  We visited local artisan markets, practiced my Español, and ate some delicious organic vegetarian food at Greens Organics.  And to think, we were so worried about visiting a country known for it's carniverous inclinations.  The food was devastatingly fresh, tasty, and downright beautiful. 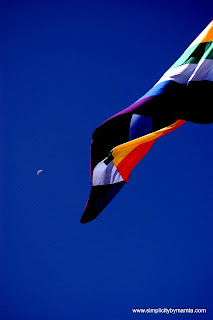 After spending the night in our Cusco hotel called Los Niños (The Children, for its sponsorship of a local orphanage), we were up early ready for our brisk walk in the mountains.  Our tour company, Sun Gate, picked us up, along with what would become a fantastico group of friends with whom to share this experience.  There were five additional guys, James from San Deigo, Nehal and Tim from England, and Dany and Derek from Canada.  We were all in our 20s and 30s, and I must admit-all pretty darn cool.  After a few days in somewhat harsh conditions, true personalities have no choice but to reveal themselves.  Yet, not one of us seemed annoying!  There was bickering, joking, and more than anything, lots of laughing all around.  We were sharing an adventure in a foreign land, and the notion was bond-worthy indeed.  After a somewhat easy up and down trail, we found ourselves famished and at the mercy of our traveling kitchen, which was comprised of 7 diligent porters, a sous chef, and a head chef.  These nine men did more in a kitchen tent than many of my own friends do in a $40K kitchen.  We ate local eats, with vegetarian adaptations just for us. There were crisp, fresh green beans, carrots, quinoa, eggs, eggplant, and always, to start, a delicious soup.  For snacks, we had crackers and jam, popcorn, and always hot tea.  There was a wonderfully tasty dish of thinly sliced green apples and celery with sweet, delicate peaches surrounding the plate.  Or the Peruvian desserts on nights 1 and 2 of the Peruvian liquor Pisco-drenched banana and apple.  Personally, I hate the taste of alcohol and I devoured these desserts.  All of this in a modular kitchen, carried in bits and pieces up a mountain by men ranging from 29-57 years of age.  They had to speed past us on the trail, set up the goods, feed themselves, feed us (welcoming us after hours of hiking with some delicious cold drink like purple corn-based punch or fresh lemonade), pack up again, overtake us to beat us to our night campsite, pitch our tents, and do the whole cooking thing all over again.  I mean-this was serious stuff.  And the staff did it with sincerity, generosity, and definite laughter. And for heaven's sake, they "baked" a cake on night 3. Without an oven. You figure it out. And for the record, it was delicious, albeit more dense than a regular cake. 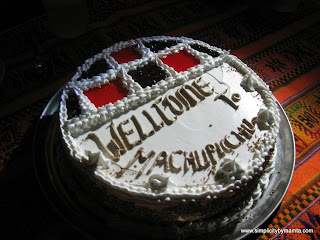 The second day of our trek was by far one of the most challenging moments in my life.  Both mentally and physically.  And I have run over 13 half marathons, 3 full marathons, and now I can say climbed mountains.  But this altitude gain was unlike any other.  It was seriously straight up. Just like Paula Abdul said. Straight up. There was no gradual climb, but rather 7 hours of climbing before lunch and then 3 additional ours after lunch.  When we summitted over Dead Woman's Pass (with a name like that, was I to think I would survive?), we were exhilarated.Pride swelled in our smiles. And those endorphins countered the menacing thoughts that clouded our brains just moments before the peak enveloped our hiking boots. 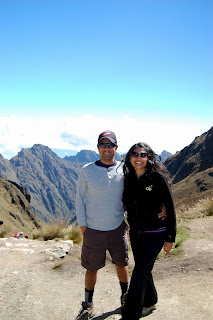 It was almost as if the pinnacle of the trip was day 2, leaving us in a relieved state for days 3 and 4.  They proved to be easy hikes, comparably speaking, of course. In fact, on day 3, we hiked for a mere three hours and traipsed around old Inca sites in the afternoon.  Probably the most memorable part was when our truly cool guide Celso announced our wake up time for the last day-the reason for it all-the day we found Machu Picchu.  Mind you, we all figured that since we were only 2.5 hours away from the revered site, a late start was imminent.  And that's when he told us we would wake up at 3:30AM. This was to accommodate the porters who had to catch the morning train back to Cusco, and what good hearted person was going to complain about that when they ensured our nutrition and beauty sleep? Panic swept over the group and my own husband let out a truly American reaction (which was lost on our Peruvian guide), What the he!!?.  Rest assured, we awoke on Day 4, armed and ready to find the treasure for which we all came. 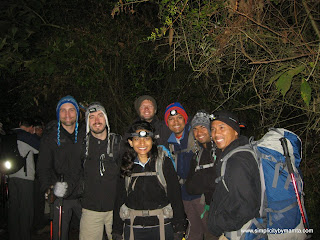 And that's when we arrived at the impressively preserved city of Machu Picchu.  We were tired, fighting to listen and capture each word Celso told us about its history.  And the treasure was that much richer, for we had persevered beyond our own doubts, dealt with the less than pleasing stench campsites acquired, and forged friendships I am sure will reunite in another world at another time. 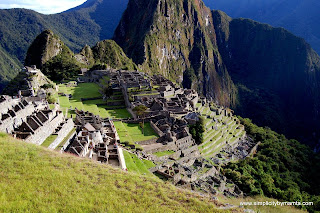 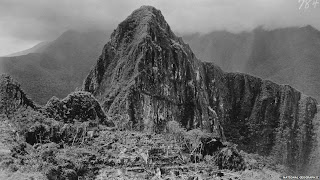 One of Hiram Bingham's pictures from 1911 of Machu Picchu, covered in overgrown vegetation. 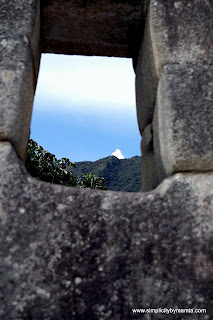 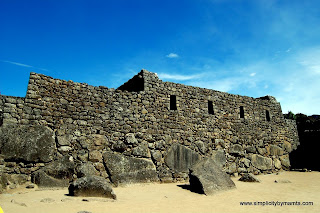 Peru did not disappoint, even with our return to Lima, where we found relaxation in the city's bioferia organica (organic street market) in Miraflores, adorable nightlife in Barranco, and culture in the city center. The country is emblazoned with sincerity, Spanish influence, and remarkable eats.  It is a land of nature. Of hard work. And of a storied history.

You can see a photo album of our Peru pictures at my site here.
Posted by M at 3:41 PM